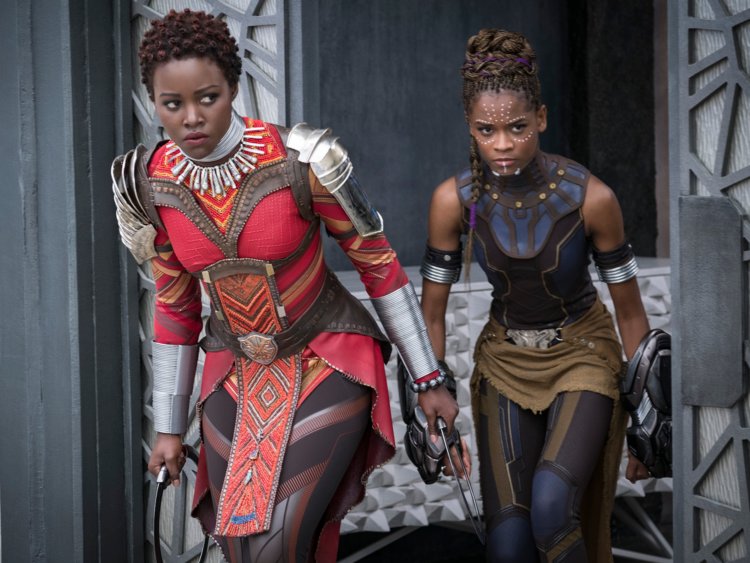 I’m still on a high from having seen Black Panther. I cannot think of too many films that I’ve anticipated so highly. High expectations often lead to great disappointments. Black Panther however does not disappoint, in any way. I can’t wait to see it again.

The character Black Panther first appears in comic books in 1966, created by Stan Lee, coinciding with the appearance of the Black Panther Party. 52 years later, Black Panther makes it to the silver screen, a long journey but well worth the wait. Written and directed by Ryan Coogler, Black Panther is one of the few films that truly gets the black perspective, not just from an “in the hood” point of view, but from a global perspective. As I sat in the theater, I wanted to take it all in, every line, every scene. The Black Panther, T’challah, is the king of Wakanda, a nation in Africa untouched by Colonizers. Wakanda is a thriving prosperous nation with technology the rest of the world only dreams of. Wakandans live in peace and secrecy with the rest of the world thinking they are “undeveloped”.

Without giving away too much of the plot, the conflict between the protagonist and antagonist in Black Panther is refreshingly not just an evil guy who wants to rule the world, destroy the world, or both. The antagonist, if you want to call him that, has a very legitimate point of view that most of us who have been oppressed can relate to. The characters in Black Panther are not, pardon the pun, cartoonish. There is much agreement between T’Challah (the king) and his rival Erik Killmonger, who challenges him for the throne. And, we get enough of Erik’s backstory to empathize with him. The question of how much you intervene is one that has to be wrestled with. What is Wakanda’s responsibility to the people who are suffering under the thumb of the Colonizers? And what tactics should Wakanda take to free them, if any? The biggest difference between the rivals is the how, not the what or the why.

Black Panther busts all kinds of stereotypes. From the king’s guards who are all females, to the king’s sister who is a straight up geek creating amazing technology the world has never seen, to an African nation untouched by colonization and slavery, to a antagonist who is really hard to root against, Black Panther brings it. There’s also lots of Black Girl Magic in Black Panther. The women are strong, independent, and real. There is plenty of action as we would expect in a Marvel superhero movie. But, the movie is also visually stunning.  The costumes catch your eye. Even the stills of the movie are gorgeous.  Wakanda is a paradise that I want to live in. It felt like Home.

We have to talk about the hair. They decided to go with all natural hair for the characters in Black Panther. I don’t know how often hair stylists get mentioned in reviews, but we’d be remiss to not give a shout out to Camille Friend #camillefriend  (on twitter at @blackeyevenus)  The hair in Black Panther is on point. Not only Lupita Nyong’o, bu the the entire cast. Even the shaved heads were gorgeous.

Black Panther is not just another super hero movie. As Chadwick Boseman referred to it, it’s a movement. I expect we will be seeing cultural reference from it very soon. If you haven’t seen it, you need to go.